If the hon. minister will look at Hansard he will find that that was to be the proceeding this yeaT as well, in order to save time. That committee, therefore, will not be fully constituted if it meets before the Senate Committee joins with ours. It would be very much out of

place for this House to say that its committee should sit while the House is in session -until the Senate agrees to the same procedure.

I am of the opinion

that this resolution is of -such character as -to require unanimous consent for its adoption. In the absence of such consent it cannot properly be put at this stage.

What were the names

and occupations of the gentlemen sent to Thetfo-rd Mines to get information or to settle the labour trouble during last year?

Sir WILFRID [LAURIER: This question has been standing since the 25th of January. When may we expect an answer?

I can give a verbal

answer now. I was not in the city on the 25th of January and I was not here until after the House rose, so my attention was not called to the question. Two gentlemen were sent; one was Mr. Archand who was at th-at time one of the fair-wage officers of the 'department, and the other was Mr. Blanchet, a barrister of Ottawa. 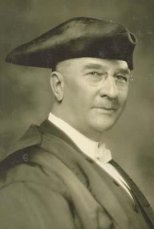 1. Has the Government been informed that it is alleged a large quantity of potatoes have been kept in cars, since first of November, 1916, on some lines of Canadian Government or other railways in Canada, and that said potatoes were frozen or spoiled, consequently having to be thrown away and thus unavailable for consumption?

2. Has the Government received, any complaints in the matter? If so, from whom?

1. Under a joint agreement the Grand Trunk railway handles Intercolonial freight at Montreal, and on November 15, that company complained that a large number of Intercolonial railway cars of potatoes had accumulated in their Montreal yards. The Intercolonial railway authorities urged consignees as. strongly as possible to take delivery, and finally were obliged to threaten to unload if consignees would not.

2. No complaint since that time. The Government has no further information on the subject.

How many appointments have been made by the present Administration since they took office, under the provision of Section 21 of the Civil Service Act?

Certificates of Qualification issued by the commission since October 15, 1911, under the provisions of section 21 of the Civil Service Amendment Act, 1908-174.

What amounts, if any, were paid to the Outlook Publishing Company, Limited, or to F. C. Cox, of Middleton, N.S., during the year 1916, for printing and advertising?