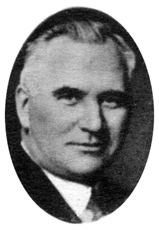 That the petitions of John Franklin Crandell, and others, presented on the 1st instant, praying for the passing of an act to incorporate the British Columbia Alberta Western Railway Company, and also an act to incorporate the Hudson Bay Western Railway Company, together with the report of the clerk of petitions thereon, be referred to the select standing committee on standing orders for the purpose of considering the suspension of order 92 in relation thereto.

rise to a question of privilege. The Prime Minister (Mr. Mackenzie King) is reported in Hansard, page 1807, as having yesterday made the following statement:

If hon. gentlemen opposite between them wish to draft an amendment with a view to trying to embarrass the government politically, that is their own lookout, but I can tell the people of this country and particularly the people of western Canada that as far as this Peace River outlet is concerned, the government does not believe that tactics of the kind will help the project.

I do not think there is anything wrong in an hon. member seeking the advice of any other hon. member, but it happens in this case that I did not submit the amendment to any other member of the House of Commons, and until it was read from the Chair I believe the Speaker was the only member of the house who knew what the nature of the amendment was.

HIS MAJESTY THE KING

TWENTIETH ANNIVERSARY OF ACCESSION TO THE THRONE OF GEORGE V.

Mr. Speaker, this being

the twentieth anniversary of the accession to the throne of His Majesty, King George V, I felt it would be the wish of hon. members of parliament and of the people of Canada that some word of greeting and good wishes should be extended to His Majesty. Accordingly, at an early hour this morning I sent the following message to Lord Stanfordham, Buckingham Palace, London:

Will you kindly convey to His Majesty the King the following message:

On this twentieth anniversary of your Majesty's accession to the throne may I be permitted respectfully to tender the cordial greetings and good wishes of the government, the parliament and the people of Canada for a long and happy continuance of your Majesty's reign. The British commonwealth of nations is only beginning to understand how7 much it owes to the position and personality of its reigning sovereign. In the great war your Majesty stood as the symbol of the common effort of all your subjects, the rallying centre of all the forces that fought in the name of British liberty. In the difficult post-war period of reconstruction, your Majesty's understanding and steadfastness have been an indispensable factor in the solution of the many problems which arose. The Canadian people offer their fervent hopes for the health and happiness of your Majesty and her gracious Majesty the Queen.

Shortly after half past nine o'clock this morning, I received the following cable: Buckingham Palace London

I warmly thank you, the government, parliament and people of Canada for your greetings and good wishes on this the 20th anniversary of my accession. I heartily appreciate the sentiments of gratitude and devotion which inspired the terms of your message.

Topic:   HIS MAJESTY THE KING
Subtopic:   TWENTIETH ANNIVERSARY OF ACCESSION TO THE THRONE OF GEORGE V.
Permalink

that the message which the Prime Minister transmitted this morning to London represents the sentiments not only of those with whom he is associated but of those who sit to the left of the Speaker, in fact, of all parties and members in the house as well as of the people of Canada, and I join with the right hon. gentleman in trusting that His Majesty, who has rendered great and distinguished service not only to his own empire but to mankind, may be long preserved, that in peace and happiness he may continue to reign over a contented people.

Topic:   HIS MAJESTY THE KING
Subtopic:   TWENTIETH ANNIVERSARY OF ACCESSION TO THE THRONE OF GEORGE V.
Permalink

I see the Minister of National

Revenue is in his seat. As I represent a section of the province of Ontario in which a number of people are interested in the manufacture of furniture, I would like to ask if the minister or his department is aware that very large shipments of American furniture are coming into Canada, and have been for some ;onsiderable time, and if there is not anything ,hat the minister can do to assist those who ire engaged in that industry in Canada by applying either the dumping clause or some other clause.

What is the duty on furniture?

The department has had complaints of importations of furniture from the southern states at prices which were, it was claimed, less than cost. The department had certain investigations made, and these claims were to some extent substantiated. As a result of that, believing that fair market value means at least the cost of goods, instructions have been given to re-appraise furniture that is coming from that source pending further investigation.

Will the minister apply

the same rule to other importations into Canada?

If conditions were precisely the same.