I desire to lay on the table, as requested by the leader of the opposition (Mr. Manion), all correspondence relating to the broadcast of Mr. George McCullagh.

PENALTY FOR OFFICERS AND DIRECTORS PERMITTING VIOLATION OF THE ACT 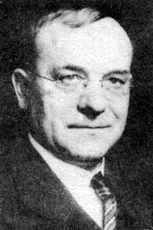 is similar to the one which passed this house last session, but which was rejected by the senate. Its purpose is to change the method of punishing those who violate the provisions of the Lord's Day Act. It is felt that the penalties should be more severe.

Canadian Press dispatch from Hamilton. Ontario, carried in the local press this morning, under the headline "U. S. Fruit is Masked as Canadian Product." states that United States fruit is being canned in the dominion and exported to Great Britain under empire preferential tariffs. This charge .was made by delegates attending the Ontario Fruit Growers' meeting in Hamilton yesterday. Will the government give assurance to the house that these charges will be fully investigated at once and that such steps will be taken as may be necessary to ensure that the entire fruit content of each container of processed fruit exported to Great Britain is of empire origin?

Mr. Speaker, a letter was

addressed to me by the hon. member which, through no fault of his, did not come to my attention until just a moment or two before I entered the house.

My recollection is that the canners, at certain seasons of the year, when a supply is not available in this country, do import certain fruits for canning, which fruits are later exported. The rule, of course, is that in order to get the advantage of the preference in the British market there must be a certain percentage of Canadian content. I think it is fifty per cent, but I am not going to commit myself on that point because I am not quite certain on the point.

I need only say to the hon. member that I shall be very glad to make an investigation with regard to the matter.

In the speech from the throne read

yesterday by the lieutenant-governor of Quebec I find the following paragraph:

Owing to the measures carried out by the present government, the old and the blind of Quebec are receiving monthly a sum of approximately one million dollars.

As this statement is bound to lead the people into error I should like to know from the Minister of Finance (Mr. Dunning) first, who established the old age pension in Quebec-

opposite to be patient. First, who established old age pensions in Quebec; second, how much of the $1,000,000 paid monthly is paid by Ottawa?

Hon. CHARLES A. DUNNING (Minister of Finance): The hon. member advised me

a few moments ago of his intention to ask this question, and in the short time available I have endeavoured to obtain information which, if it is not complete, I will supplement later.

With regard to the second question, the agreement between the government of Canada and the government of Quebec with respect to old age pensions, my answer is that it was initiated not by the present government of that province but by its predecessor. I should have pointed out this most important