RESOLUTION EXTENDING TO HIS MAJESTY LOYAL AND AFFECTIONATE GREETINGS

Mr. Speaker, as hon. members of the house are aware, to-day, June 13, both in the United Kingdom and in Canada, has been set apart by statute for purposes of official observance of his majesty's birthday. Hon. members will recall that last year his majesty's birthday was officially celebrated on May 20, and that at the time their majesties were in this the capital city of the dominion. The members of both houses of parliament had the signal honour of entertaining the king and queen at dinner on the evening of the king's official birthday.

A year ago to-day, June 13, 1939, their majesties were concluding the tour they had made throughout Canada. They had just completed their memorable visit to the United States and, if I am not mistaken, on that, day were in the province of my hon. friend the leader of the opposition (Mr. Hanson). That was the day prior to their arrival in Prince Edward Island and subsequently in Nova Scotia, and their departure from Halifax for the old land.

I am sure it will accord much with the wishes of hon. members and of the people of Canada whose representatives we are that a message should be sent from this House of Commons to the king letting his majesty know that the memories, of which I have just made mention and which will ever constitute one of the most cherished pages in the story of our national life, have been vividly revived by to-day's associations, and extending to our gracious sovereign an expression of our most loyal greetings on this the occasion of the observance of his majesty's official birthday.

I have accordingly prepared a resolution which I believe expresses sentiments that will be warmly welcomed by all. I have shown the resolution to my hon. friend the leader of the opposition. He has said he would be pleased to second it.

With the permission of the house, therefore, to waive the rule requiring notice, I would move, seconded by Mr. Hanson:

That, on this, the occasion of the official observance in Canada of the birthday of His Majesty King George YI. a humble address be sent to his majesty in the following words:

"To the King's Most Excellent Majesty:

We, the members of the House of Commons of Canada, in Parliament assembled, desire respectfully to extend our loyal and affectionate

greetings to Your Majesty on this day set apart for the official observance in Canada of your Majesty's birthday.

Just one year ago Your Majesty and Her Gracious Majesty the Queen were receiving the united acclaim of the Canadian people as your memorable tour of the Dominion was drawing to its close. To-day, our feelings of loyalty and affection for your majesty and our regard for the freedom of British institutions symbolized in the crown are stronger and deeper than ever.

We have witnessed with all the pride of devoted fealty how your majesty has discharged your high and solemn duty with undaunted courage, wisdom and understanding.

In this dark hour when the ruthless ambitions of wicked men have shattered the hopes of the civilized world, the people of Canada vividly recall how faithfully you laboured to prevent the calamity that threatens the world's freedom.

Your peoples stand resolute in the defence of the liberties of mankind. Steadfast in the noblest of causes, united in purpose, we are heartened by the inspiration of your example.

We pray that divine Providence may continue to guide and guard your majesty in the discharge of your high responsibilities and that you may be vouchsafed continued strength and many years in the maintenance of the glories of your ancient throne."

Mr. Speaker, I have never risen in this house with greater pleasure or with a heart and mind more full of loyalty and fealty to His Most Excellent Majesty the King than I do on this occasion. And with all our hearts we, His Majesty's Loyal Opposition, reecho the sentiments of loyalty and devotion which are contained in this resolution as well as those which have fallen from the lips of the Prime Minister (Mr. Mackenzie King).

As stated in the resolution, just a year ago their majesties were receiving the united acclaim of all the Canadian people, irrespective of race, class or creed. To-day, having regard to all the rapid changes from peace to war, the people of Canada are more devoted, more loyal if possible, and more attached to the persons and fortunes of our gracious and illustrious sovereign and his gracious queen than ever before. We admire his high courage and resolute purpose which have been an inspiration and guide to all his people. Their high courage and calmness at this most critical period in the history of the nation is to us, his majesty's Canadian subjects, an example which we may well follow.

May I say humbly and with the greatest sincerity that because of what has happened and is happening over there I have had no great heart for party conflict or party warfare. There is a time and place for everything. Party strife and party warfare have a place in normal times, but in days such as these I feel that such matters fall into insignificance. Let us get on with the work of

this house; let us get on with Canada's war effort, each putting forth our best so that we may present a common front along with our mother country and her gallant allies to the common foe. Let us all reverently, yea, with affection, say in unison, "God save the King".

Mr. Speaker, on this, the official birthday of His Majesty the King, it is fitting that a resolution such as this should be passed by the House of Commons to demonstrate anew our unity in the great struggle in which the British people and our French allies are engaged. We support the motion most heartily.

Mr. Speaker, of all the movements which are extant in the British empire, there is none more devotedly and enthusiastically loyal to the king and queen of Britain than the social credit movement. We will rejoice in supporting unanimously this resolution.

Whereupon the members of the house rose and sang

God Save the King.

Mr. Speaker, I should like to inform hon. members that I have received word that the ashes of the remains of the late Minister of National Defence were brought back from Montreal to Ottawa at noon to-day and have been interred in the soldiers' plot at Beechwood cemetery. The burial took place in the presence of the family, the Reverend Stuart Ivison officiating. 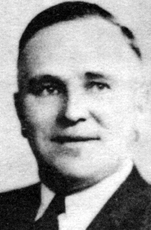 Is Walpole island patrolled by the Royal Canadian Mounted Police?

There is also an Indian supernumerary constable stationed on the reserve on Walpole island.