I should like to direct a question to the Minister of Finance (Mr. Ilsley). I have received a telegram from Toronto reading as follows: '

Prospective investors are asking what proportion of the new war loan is to be used by the government for war purposes. To clarify this [Mr. MacNicol.l

point would you please ask Mr. Ilsley for a definite answer so that the facts will reach the public through the press.

Whom is it from?

Air. JACKA1AN: From a gentleman in

Toronto. If the hon. gentleman wishes his name, I can give it.

I think my hon. friend

should give the name.

The wire is sent by

My hon. friend gave me notice yesterday of this question, and in reply I may assure him that the total cash proceeds of the new victory loan will be used for war purposes. For the fiscal year ending March 31, 1942, the ordinary expenditures of the government of the Dominion of Canada are estimated at $468,000,000, including $35,000,000 for wheat acreage reductions. The total ordinary revenue is estimated to amount to SI,400,000,000, which means that Canada is raising from current taxation about three times the government's ordinary expenditures.

We are spending more than this great taxation surplus over ordinary expenditures on the war effort; in fact we are spending on direct war effort a total of at least $1,300,000,000. Total expenditures on behalf of Canada are thus at least $1,768,000,000. In addition we are sending vitally needed supplies from Canada to Great Britain, which Great Britain is unable for the time being to pay for with Canadian dollars. This will add approximately $800,000,000 to our burden after deducting the amount of our own exchange deficit with the United States. Our government must provide the Canadian dollars with which to pay our workmen, fanners, miners, transport workers, et cetera, for the cost of producing these supplies which are so urgently needed. Or to put it another way by expressing it in percentages.

Canada's total expenditures, including aid to Great Britain, for the year ending Alarch 31, 1942

Where the money comes from

If we do not include the net figure of $800,000,000 for vital supplies to Great Britain, then Canada is financing both its ordinary and its war-time expenditures by current taxation to the extent of 79 per cent.

the two combined make up 79 per cent? Seventy-nine per cent of the combined war and ordinary expenditure is made up from taxation. That should be clear.

We are meeting out of

revenues our total ordinary peace-time expenditures, plus our war-time expenditures, but not including assistance to Great Britain, to the extent of 79 per cent. It must thus be obvious to all that as Canada is raising in taxes three times its ordinary expenditures, every dollar raised through the victory loan is a dollar which will be directly devoted to war puxposes.

In what I have just said I have been speaking of the cash portion of the victory loan. As the house knows, we are also making a conversion offer to holders of dominion 5 per cent national service loan bonds which mature on November 15, 1941.

would like to ask the Prime Minister (Mr. Mackenzie King) if he will be kind enough to give consideration to the following. From the business and commercial standpoint, the city of Toronto at present has no direct representation in the cabinet. This may not be a matter which a private member should bring up, but the Prime Minister's family have had a very long and close association with the public affairs of that city, his grandfather having been its first mayor. The city is the commercial and industrial metropolis of Canada, a leader in war work, recruiting, patriotic activities of all kinds, and a large subscriber to war loans. True, the hon. Postmaster General (Mr. Mulock) was born and bred there and his distinguished grandfather has done a great deal for the city, but the Postmaster General does not represent a Toronto seat directly, and in the past we have at times had two or three ministers in the cabinet representing the city. Will the Prime Minister give consideration in the contemplated cabinet changes to giving our city increased representation in addition to our present representative?

I thank my hon. friend for

his kind personal references, and I shall be only too pleased to consider what he has said. But his remarks call to mind something I once heard Sir Wilfrid Laurier say when representations were made to him from Ontario, and particularly from the city of Toronto, respecting the cabinet. Sir Wilfrid Laurier replied. "You good people from Toronto want me to have a cabinet of angels, but you do not send me angels to make a cabinet of."

REFERENCE TO MOTION FOR PAPERS PASSED ON MARCH 5 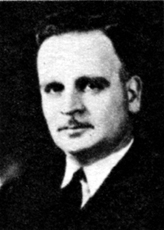 Mr. Speaker, some weeks ago the house passed a motion which I moved for the tabling of correspondence relative to the Red Deer post office. With the permission of the house I ask leave to withdraw that motion.

The house resumed from Monday, June 2, consideration in committee of Bill No. 87, to amend the Income War Tax Act-Mr. Ilsley- Mr. Vien in the chair. Sections 1 to 4 agreed to. On section 5-Repeal of paragraph (c) of section 3.