I was the one who brought up the question of sales. What would the hon. gentleman suggest doing with a dairy cow if one could not get a milker to milk that cow? Would he sell it, or what would he do with it? 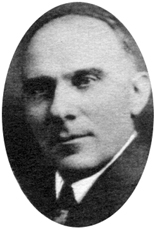 I would get a milking

Where would you get one, with priorities?

A fair amount has gone to

That might be a good thing, too. I repeat, this government has had a reasonable amount of sympathy with agriculture when we realize that it has assigned, of the taxpayers' money, about $100,000,000 to 728,000 farmers, which means over $100 for every farmer. I still think there is something that can be done, and I rather approve what the hon. member for Stanstead said. The butter price is too low. But if the argument is that the price of milk for producing butter, the price of processed milk and the price of city milk should all be on the same basis, then I do not agree.

Some members have done so.

I made the statement, but I said "manufactured milk."

Well, I use the words "processed milk" and the hon. member says "manufactured milk." I would say that if there is a difference of fifty cents between processed milk and city milk, and fifty cents still less for milk on the basis of butter, keeping the skimmed milk at home, that is somewhat on a parity. In the supply of milk to the city trade a great deal of expense is involved in the production for this trade. I have had experience of it. I know it takes more to maintain the standards for the city trade and it is worth practically fifty cents per 100 pounds and more. But I think the price of butter at thirty-five cents is lower than it should be, and I believe the consumer should pay the farmer for that product. It should not come out of the taxpayer, and my view is that we should eliminate subsidies as far as possible and see that the consumer pays for the products of the farm.

Another matter that was mentioned this afternoon is the fact that so much of our breeding stock leaves Canada and goes to the United States. We farmers in Canada are rather too modest, and possibly one of the difficulties from which our own industry is suffering is the fact that the man engaged in farming is too ready to damn his own profession, so that if there is any reason why he cannot sell his farm it is that he has advertised to the whole world that there is no money in farming. That may be the reason for lower prices of farms. As regards selling our breeding stock, I think that is a splendid market to have, for this reason. The average Canadian farmer is a better live stock man than the average United States farmer. That is because the Canadian farmer has more of the old British blood in his veins. The fact is that we compete with our United States neighbours in the large shows and bring back the red ribbons, and we can do so because we have superior cattle. We Canadians have built up a reputation for good stock. In spite of the fact that the United States is an immense agricultural country, they have never produced one breed of cattle there. The British breeder has produced about twenty breeds; we in Canada have produced one, which is not too bad.

What breed is that?

One in Quebec, the Canadian; it is one with purely Canadian characteristics at least.

What is the name of that breed?

I say the Canadian. I believe they have a herd book; it is a distinct breed in Quebec.

We ship stock to the United States continuously, and that is a market we have a right to guard jealously. They pay us good prices. There is in my community a breeder of shorthorns, who sold over forty head to the United States at a price averaging over $560 each, which is an indication of the quality of the stock many of our farmers in this country breed.

We should not overlook the good things the minister has done in directing the policy of agriculture in this country. No matter how much we have we always want more, but I should not like to think the solution of our great problem to-day of winning this war can be achieved only by having high prices for our products. I believe every effort should be made-and I think this government has been reasonable in trying to safeguard the interests of the people in this matter-that we should not have our prosperity in time of war. Let us postpone that until peace time, and let us all share alike in the difficulties of the boys at the front. They are not asking for increased wages.

If we can maintain a condition of affairs during war time that will not create the disasters that happened through the wild inflation which took place after the last war, then I believe our interests will be better protected and there will be less suffering while the war is on.

I have listened with a good deal of interest not only to the Minister of Agriculture but to the hon. member for Brant, whose home is close to mine. Hon. members on the other side of the house always like to refer to the times of depression in the thirties. They would lay all the blame for low prices on the government in power between 1930 and 1935. The minister to-night has patted himself on the back and blown his own horn to quite an extent in regard to present farm prices. It is a peculiar thing how, if the present administration is trying to raise prices and give the farmer a better deal, there was any need to impose a price ceiling. The minister has talked pretty well-around that question; he has taken credit on the one hand for better prices received by the farmer-we all admit he is getting better prices than prior to the war-and at the same time he tries to justify the imposition of a price ceiling in order to keep prices

down. I do not see how he can have it both ways. Then he spoke about the floor that the present administration had put under farm prices. If I might venture a suggestion, I would say that it is always the history in war time, as it was in the last war, that as soon as war is well under way, prices of farm products, as well as other products, rise to very high levels. I go further; I speak for myself only when I say that I have always doubted whether it was really necessary to impose the price ceiling at all. Looking back over the last war-and I lived through it; I was on the farm all that time-I have yet to learn where the rise in prices at that time did any particular harm. I know that to the farmers it did a great deal of good, because many farmers at that time laid by sufficient funds to carry them through the period of depression, without which funds they would have been in a grave state indeed.

Is the hon. member prepared to say that all the income the farmer gets is from agriculture, that he may not get part of the income from other industries?