I think the minister may change his view on the matter as I proceed with my remarks.

The Trans-Canada highway does not come within the limits of the Department of Transport, and I do not think it would be in order for the hon. member for Kamloops to discuss it at this time.

I was not going to discuss the Trans-Canada highway; I was going to discuss highway transportation in general and make certain recommendations, and it seemed to me that this general item of the Department of Transport was the proper place to do so.

I understand that the hon. member intends to discuss highway transportation, but again that is a matter which does not fall within the jurisdiction of the department; it is a provincial matter.

There is no department of dominion-provincial problems, and these

problems of dominion-provincial relations must be discussed under one department or another.

I do not want to interrupt unduly, but there is no estimate in my department which would have to do with that in any way, and I do not see how my hon. friend could take it up on these estimates.

May I call it eleven o'clock so that we can both think over the matter?

I would move that the committee rise, report progress and ask leave to sit again. I understand there is a report by a committee which should be tabled before eleven o'clock. 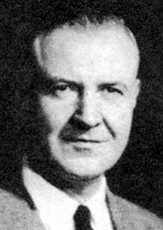 Mr. Speaker, I wish to rise on a question of privilege.

It is after eleven

I see that the order of precedence says that on Monday senate amendments to public bills should be considered. I have been sitting here for three sessions to-day; as a matter of fact I rushed six hundred miles to be here on time, at eleven o'clock this morning, expecting that bill No. 8, respecting Canada Day, would be called to-day. It was not. I should like to know from the government leader whether such a bill, after being passed in this house, and having received the sanction of the senate, even with amendment, is not as important as, for instance, bill T-ll, an act for the relief of Fania Pustopedskaites Sobolevicius, otherwise known as Fanny Pustopedsky Sobolevicius. Now the day has passed, and the bill was not called. I understand it may not be called until Monday next, and I have read in the paper that we may. adjourn on Saturday. Therefore it is a first-class funeral of a bill which must be in the minds of some people as important as this other one.

Order. I have given some latitude to the hon. member, in spite of the

fact that it is after eleven o'clock. If he has any question of privilege I would ask him to state it.

Mr. ST. LAURENT: It' is already after eleven o'clock, but I should like to point out to the hon. member that it is not the importance of the legislation which determines the position it occupies on the orders of the day; that is determined according to the standing orders and resolutions of the house. To my amazement we have put ourselves in the position that since the 15th of April there has been no time for consideration of amendments made by the senate to a public bill introduced by a private member. The standing orders provide for consideration of such matters only on Monday, after private bills. On the 9th of April there was adopted by this house a resolution that on Mondays government orders would have precedence over everything except questions and notices of motions. I do not think it was intended at that time to shut out the consideration of amendments made by the senate to public bills presented by private members, but that has been the result. Until government orders are exhausted, such amendments cannot be called for consideration, and government orders are never exhausted until we arrive at the time of prorogation. The combined effect of the standing order and the resolution of the 9th of April is that there is no tirrie now at which this item of business could be called for consideration without the unanimous consent of the house. It happens to be a matter about which there is considerable division of opinion, and I would not anticipate that the house would wish to give unanimous consent to its taking a position that, under the orders and resolutions, it is not entitled to.

I am afraid that, as a consequence of what was done on the 9th of April, not intentionally but nevertheless as a decision of the house, there is no room for the consideration of these amendments at this session, and the hon. member will have to trust that the house, the country and the government will consider as to whether the matter should not be reintroduced as a measure having other precedence at the next session of parliament.

Mr. Speaker, may I just suggest to the minister that I have never heard a more polite burial service in my life.

On motion of Mr. Mackenzie the house adjourned at 11.08 pm.