FOURTH SESSION-TWENTIETH PARLIAMENT 11-12 GEORGE VI, 1948 VOLUME III, 1948 COMPRISING THE PERIOD FROM THE ELEVENTH DAY OF MARCH, 1048, TO THE NINETEENTH DAY OF APRIL, 1948, INCLUSIVE BEING VOLUME CCLXII FOR THE PERIOD 1875-1948 INDEX ISSUED IN A SEPARATE VOLUME OTTAWA 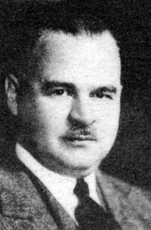 Mr. Speaker, I rise to a question of privilege. A few days ago many members, and I was one of them, received through the post office of the House of Commons a copy of the communist newspaper Combat. The envelopes containing that paper, like the one I hold in my hand, did not bear any post office mark, contrary to section 275 of the post office regulations, which reads as follows-

Order. I would ask the hon. member to state his question of privilege.

I am about to do so, Mr. Speaker, but I submit that on a question of privilege we are entitled to explain why we raise the question. The section to which I refer reads:

Postmasters should be careful to postmark distinctly all letters, registered or ordinary, posted or received at their offices, and to effectually cancel all stamps thereon.

As the envelopes we received did not bear any postmark as required by the rules, we cannot identify the post office they were mailed at or where they came from.

It is stated in that newspaper that it was published in Montreal, but we cannot ascertain where it was mailed.

My point of privilege, Mr. Speaker, is that our mail boxes are not rubbish cans and that they should be used only in accordance with the post office regulations.

I have the honour to lay on the table of the house a report of the civil service commission relating to the appointment of Miss M. E. Black to a permanent position in the debates branch of the House of Commons.

Mr. HUGHES CLEAVER (Halton) presented the first and second reports of the standing committee on banking and commerce, and moved that the first report be concurred in. Motion agreed to.

QUESTIONS SUBMITTED TO CAN ADLAN GOVERNMENT AND ANSWERS THERETO

Right Hon. L. S. ST. LAURENT (Secretary of State for External Affairs): Yesterday there was a question on the order paper by the hon. member for Broadview (Mr. Church) with respect to developments in connection with the possible entry of Newfoundland into confederation, and I asked that it be allowed to stand. As I understand that the Prime Minister has information to communicate to the house today, before that is done, I should like to table copies of certain additional questions that were submitted to the Canadian government by the governor of Newfoundland, and copies of the answers that were given to those questions.

Mr. Speaker, I might give the house immediately the statement to which my hon. friend the Secretary of State for External Affairs has just referred.

We have been advised by the United Kingdom government that a statement is to be issued today in Newfoundland announcing that the people of Newfoundland will be given the opportunity shortly to vote in a referendum on their future form of government. Three questions will be submitted to the people: continuation of commission government for a five-year period; restoration of responsible government as it existed in 1933 prior to the establishment of commission of

government; and confederation with Canada. If Ku lorm of government receives an absolute majority, a second vote will be held some time later on the two forms receiving the largest support.

I think it would be useful were I to remind the house of the recent steps preceding the present announcement. It will be recalled that last summer a delegation from the national convention visited Ottawa to ascertain what fair and equitable basis might exist for federal union of Newfoundland and Canada. A committee of the cabinet was appointed to meet with the Newfoundland delegation. Several meetings were held during the summer for the exchange of information and exploration of the many issues that would be involved1 in union. At the close of these meetings a comprehensive report was issued, copies of which were tabled early in the present session of parliament.

After due deliberation the government sent the governor of Newfoundland, for transmission to the national convention, a statement of terms believed to constitute a fair and equitable basis of union of Newfoundland with Canada should the people of Newfoundland so desire. In a covering letter under date of October 29 last to the governor, I said in part:

The statement of terms transmitted by the Canadian government was discussed at length by the national convention in Newfoundland. The convention, however, voted 29 to 16 against recommending the inclusion of confederation on the referendum ballot. Subsequently many telegrams, bearing the names, it is said, of some 50,000 voters, were sent to members of the convention for transmission to the Secretary of State for Commonwealth Relations requesting that the people be permitted to vote on the question.

The national convention was only empowered to make recommendations regarding the questions to be included on the referendum ballot, decision on the matter remain-

-the terms offered by the Canadian government represent the result of long discussion with a body of Newfoundlanders who were elected to the convention and the issues involved appear to have been sufficiently clarified to enable the people of Newfoundland to express an opinion as to whether confederation with Canada would commend itself to them. In these circumstances and having regard to the number of members of the convention who supported the inclusion of confederation with Canada in the ballot paper, His Majesty's government have come to the conclusion that it would not be right that the people of Newfoundland should be deprived of an opportunity to considering the issue.

Will the proposed arrangement addressed by the Canadian government to Newfoundland be submitted to this house before any agreement is concluded, in case the result of the referendum in Newfoundland is favourable to its entry into confederation?

The answer is yes. That is part of the terms we are prepared to recommend.