2. Information not available by districts.

3. We do not have record of the registered owners of the encumbered properties in this department. To find out how many of the original debtors still own the land, it would be necessary to enquire from the registrars of the various land registration districts of Saskatchewan.

6. The practice of sending annual statements of seed grain indebtedness was discontinued in 1930 due to the depression and has not been resumed.

7. The cost of seed grain collections since 1945 is estimated as follows:

About half the work in seed grain collections concerns Saskatchewan and the estimated expense for Saskatchewan would be one-half the above total, or $11,000 since 1945.

1. Has the government taken any steps requesting Britain and the other dominions to hold an empire conference in London, on trade, defence and migration within the empire?

OIL, POTASH AND URANIUM-SURVEYS IN THE PRAIRIE PROVINCES

1. Are any surveys to be undertaken during the present summer under the direction of the department of mines and natural resources in Manitoba, Saskatchewan and Alberta for the purpose of locating oil, potash and uranium?

1 and 2. The following geological parties will be sent out in the field: Alberta, five; Saskatchewan, two; Manitoba, five.

These parties will be engaged in general geological mapping in areas favourable to the search for oil and other minerals.

The potash in Saskatchewan occurs at depths of 3,500 to 7,000 feet and can be located only by exploratory' drilling. An officer of the department keeps posted on the situation. 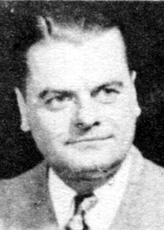 X. Have any telegraph lines formerly owned by the government or the Canadian National Railways, in the county of Chicoutimi, been sold or transferred to Jules Brillant, or someone else?

3. What was the cost of construction of the said lines?

4. Why did the government dispose of such lines?

1. What was done last year to improve the health of Eskimos in Canada?

2. What is the Eskimo population of Canada?

Mr. Speaker, I received this morning the following telegram from- the Prime Minister of Great Britain, the Right Hon. C. R. Attlee:

On behalf of my colleagues and myself I should like to express to you the deep regret with which we have heard of serious floods in British Columbia and our sympathy with those who have been rendered homeless.

In reply to that message I sent the follow-acknowledgment :

I thank you warmly for the expression of sympathy from your colleagues and yourself for those rendered homeless by the disastrous floods in British Columbia. Immediately on its receipt I communicated your message to the Premier of British Columbia. The sympathy of the United Kingdom government will be deeply appreciated by all the people of Canada, and especially by those of the stricken area.

Referring to the flood conditions in the Fraser valley, I have this morning 'been in further communication with the premier of the province, Mr. Byron Johnson, concerning the floods in the Fraser valley, and I should like to make a statement to the house with reference to where the matter stands as between our two governments at the present time.

It is clear that the damage has already reached such proportions that federal assistance will be necessary, not only for relief, but also for rehabilitating and restoring the devastated areas. To help in allaying anxiety in the minds of thousands of Canadians who are homeless and who have lost so much in this terrible disaster, I have, with the approval of my colleagues, informed the premier that the federal government is prepared to assist the province financially, not only in meeting the expenditures required for immediate relief, but also in meeting the cost of rehabilitation and restoration. The two governments are continuing to co-ordinate, in the most effective manner, the services of provincial and federal departments, and are in consultation on the extent of the financial needs, their equitable apportionment, and the supervision of expenditures.

I might say our government has in mind, and I have suggested to the premier of British Columbia, the appointment of a representative of our government at Victoria and the appointment by the government of British Columbia of a representative of their government, the two to become members of a commission that might be called the Fraser valley relief and rehabilitation commission, to have general supervision over the entire situation, and be able to deal with questions as they may arise from hour to hour, as well as from day to day.

I am not in a position as yet to say who will be named; I think, however, it is well that hon. members and the people of British Columbia should know that the two governments have felt that what I have mentioned would be the most effective manner of having the two governments work together in connection with matters which have already arisen or may develop from now on.

Mr. Speaker, I thought hon. members might be interested to learn something of the exact situation in the Fraser valley as reported to me by the area commander.

The report would indicate that along the Fraser river delta the general situation has deteriorated slightly in one or two sectors, but on the whole the situation is reasonably favourable.

To the north along the Fraser river, Lillooet was reported to be isolated, and in the interior the threat along the Columbia river continued with flooding in the low-lying sections in the Trail area.

All personnel are extremely tired, as they have been working hard for very long hours; but morale and discipline are excellent. The control organization is functioning well, with excellent liaison at all levels.

Ten officers and two hundred other ranks of the Princess Patricia Canadian light infantry are being flown in from Calgary as reinforcements, one hundred today, with the remainder tomorrow. This personnel will be deployed in the Chilliwack area on the south bank, on arrival.

There was little change in the over-all army manpower figures, with a total of 1,482 actively participating, as follows: Active force 590; reserve force 892. Large numbers of civilian personnel continue to assist, with approximately 1,000 being employed under army sector commanders. Fifty-eight set battery situation now appears to be satisfactory. Additional quantities of D8 twisted cable are being dispatched today via air.

The disaster wireless net is working well. A small amount of commercial traffic is now being carried by army circuits between Calgary and Victoria. A line system is being laid along the dikes to improve communications. Four radio cars are now operating, working into the B.C. Telephone Company net.

The area commander in a signal has this to say:

Sector commanders are working very hard and their organization and planning is first-class. Most civilians are co-operating very well and appear to be glad that there is a unified control. We have our troubles, of course, but that is to be understood. Brigadier Murphy is in charge of the manpower and material section and Brigadier Rockingham is in charge of the liaison section. Both these sections I set up yesterday and both are functioning well.

"The navy is here," as Mr. Churchill would say, and is doing a magnificent job. I am filled with admiration for the way in which the air force is meeting every demand. My relations with the respective commanders are most amicable.