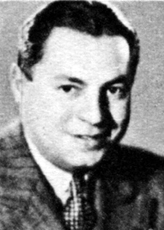 Mr. Speaker, I rise to a question of privilege. May I protest most vigorously against a newspaper dispatch appearing in this morning's issue of he Canada which I consider derogatory both to the leader of the opposition 'Mr. Drew) and to myself, and which I believe will be so adjudged by every hon. member. The article, headed "Gorgeous George Drew," is translated as follows:

Mr. Drew, leader of the Progressive Conservative party, this morning went to his hairdresser's. This commonplace event would not warrant underlining if it did not denote a significant state of mind in the Carleton colonel.

Yesterday Mr. Drew brought to the house a head of hair which would have done credit to a zazoo.

During his speech on the address Mr. Beaudry could not refrain from alluding to this in the following words, which do not bear translation:

"Where we were told to expect master minds we come up against recent prize ring technique. Where we were sold gorgeous George, all we see is a new hair-do."

This afternoon, at the opening of the sitting, everyone noticed with a smile that, in the morning, Mr. Drew had had his hair cut American fashion.

This is my point of privilege and my protest: I did not intend, and I do not intend, to be adjudged the hon. member's tonsorial adviser, much as I shall take great delight in being one of the Carleton Samson's clipping Delilahs.

ADMISSIONS TO CANADA IN 1948

On the orders of the day: Hon. J. A. MacKinnon (Minister of Mines and Resources): Mr. Speaker, I should like to place on record the following information regarding immigration to Canada during the calendar year 1948. During 1948 a total of 125,414 immigrants entered Canada. This was the largest total of any year since 1929, and is almost exactly twice as many as came in during 1947, when the figure was 64,127. Of the 125,414 immigrants, 46,057 came from the British isles, and 7,381 from the United States. Immigrants from northern European races numbered 16,957, including 10,169 Dutch. Other races contributed 55,019 new Canadians, the largest individual groups being 13,799 Poles and 10,011 Ukrainians. Disposition of the immigrants by provinces is as follows: Ontario 61,621 Quebec 24,687 British Columbia 11,918 Alberta 9,715 Manitoba 7,750 Saskatchewc 5.087 Nova Scotia 2,813 New Brunswick 1,476 Prince Edward Island 269 Yukon Territory 64 Northwest Territories 14 The movement of immigrants to Canada during this year was facilitated by an arrangement made with the Cunard White Star line which kept the Aquitania on the north Atlantic run and provided over 12,000 priority berths for immigrants. This arrangement, but expanded to cover 15,400 priorities, has been continued for the year 1949. The government also assisted in the conversion of a German prize vessel which is now known as the Beaverbrae and is engaged in carrying to this country from continental Europe close relatives of persons resident in Canada. Finally, the government has arranged with Trans-Canada Air Lines for 10,000 air passages to be made available to immigrants from the United Kingdom between the 1st of July, 1948, and the 31st of March, 1949. During the year immigration offices were opened or reopened in Glasgow, Liverpool and Rome.

Mr. Speaker, has the immigration branch medical and immigration officers in every European country?

In which countries are there no such officers?

We are not represented in countries behind the so-called iron curtain.

Inquiries of the Ministry AIR TRANSPORT

Mr. Speaker, I should like to ask a question of the Minister of Transport. Did Australia object to Canada's action in changing the Canadian-Australian air agreement by turning the Pacific operation over to Canadian Pacific Air Lines? If so, what is the present status of the matter?

I should like to ask a question of the Minister of National Revenue. Will the minister give the house and country a clear and comprehensive definition of the expression "basic herd" as it is to be used in the computation of income tax by stock raisers during the year 1949?

I thank the hon. member for having given notice of his question. The department's definition of "basic herd" is contained in directive 230, made public on November 17, 1948. Representations for the modification of this directive have since been received, and are now under active consideration. I shall be pleased to send the hon. member a copy of directive 230, and also to table a copy of it.