Apparently it has not yet been passed. 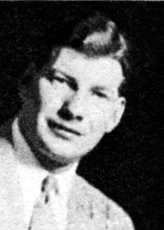 Minister of Trade and Commerce respecting the appointment of Mr. Bracken to investigate the box car situation. Can the minister assure the house that the powers granted the Canadian wheat board to allocate box cars under the Transport Act, which act established the office of transport controller, will not be allowed to expire in May, which I understand is the expiry date with respect to that section of the act having to do with the transport controller?

Mr. Speaker, the government has no intention of allowing those powers to expire.

Mr. Speaker, I should like to direct a question to the Minister of Trade and Commerce arising out of many complaints that the farmers who have obtained cash advances and who are now taking advantage of the special 400-bushels over delivery quota provided for the production of good seed are having half the proceeds deducted from the amount of cash advances they obtain. I wonder if the minister could say whether under the act action could be taken to prevent this practice, as I think he will agree with me that the 400-bushels extra delivery quota is necessary for the production of good seed.

I should like to thank the hon. member for raising this important question. I am consulting with the wheat board and examining the act to see if an answer can be provided that will meet his requirements.

REQUEST FOR INTERIM PAYMENT ON

Mr. Speaker, I should like to direct a question to the Minister of Trade and Commerce. On Tuesday of this week he intimated that he hoped to be able to make an announcement soon in connection with an interim payment on the 1956-57 crop which would be as favourable as those announced by his predecessor on January 30 a year ago, amounting to 10 cents a bushel, and on February 2 two years ago. Is he now in a position to make an announcement as to the amount, and when the money will be available to the western farmers?

Mr. Speaker, I think the government has amply demonstrated that its

Railway Grade Crossing Fund concern for the western farmer exceeds that of any other party in the house. I think the hon. member might accept my answer of the other day as being satisfactory under the circumstances.

In view of the importance of this question, Mr. Speaker, I wonder whether the minister could not tell the house and the country when an announcement will be made.

Mr. Speaker, I wish to make a statement regarding an increase in the railway grade crossing fund. This fund, which is administered by the board of transport commissioners, is used to assist in creating grade separations at railway crossings on the basis of cost sharing arrangements with municipalities and the railways, which are determined by the board. The amount which in the past has been voted annually is $5 million.

The projects involved are widely spread across the country and involve substantial use of local labour. An increase in the fund will therefore be of considerable assistance in developing additional local projects to assist the employment situation. Moreover, the projects in themselves are highly desirable, since not only does a substantial backlog of grade crossings requiring improvements exist, but new projects such as the trans-Canada highway are creating new grade separation problems which involve heavy expenditure, particularly in mountainous areas.

It has therefore been decided that for the fiscal year 1958-1959 the amount voted to this fund will be increased from $5 million to $15 million. If this amount should not prove adequate to take care of the useful and necessary projects which may be possible of authorization by the board it will be increased even further.

Newfoundland Ferry Service from the fund toward the cost of any one project. It may be that some modification in these arrangements will be desirable if we are to get the best use out of the increased funds available, and this matter is now under study by my officials. If further changes should be found desirable I will recommend that appropriate legislation be introduced accordingly at the next session of parliament.

Before the minister takes up another matter, may I ask him if he can inform the house of the approximate expenditure from the grade crossing fund in this current year?

million was added a short time ago making the amount available for this year $7 million. It is estimated that this sum will be required. [Later:]

May I direct a question to the Minister of Transport, arising out of the announcement he has just given concerning an increase in the grade crossing fund from $5 million to $15 million. Has consideration been given to the reapportionment of the cost of these projects as between the railways, the provinces and the municipalities so as to lighten the burden of the municipalities?

That whole matter is under consideration by my department at the present time.