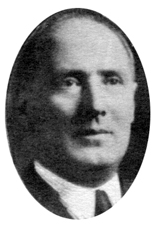 On
a question of privilege, Mr. Speaker, on my return to the city early last week I was twitted by a number of hon. members with

Farmers' Creditors Act
regard to certain things I am alleged to have said during the progress of the Saskatchewan election. Although I searched diligently for it, I could not until Wednesday afternoon locate in Hansard what the right hon. leader of the opposition (Mr. Bennett) had charged me with saying. I would have brought it to your attention yesterday, but out of deference to the Minister of Finance (Mr. Dunning) who was presenting his budget I deferred doing so until to-day.
I find on reference to Hansard of June 7 last at page 3619 the following:
Mr. Chevrier: I am sure your government
would satisfy the hungry people.
Mr. Bennett: Do not let us talk about hunger. Just think of it! One hon. member, not here, saying that if you be hungry in Saskatchewan do not think of voting for this government. Do not think of voting for this government. If you be hungry think what will happen if you do not vote for the Patterson government. That is what the hon. member for Regina (Mr. McNiven) has been stating to the people of this country, according to the public press.
I want to assure you, Mr. Speaker, and other hon. members, that I never said anything, either directly or indirectly, which by any stretch of imagination could be so construed. What is more, I have diligently searched the Regina press, and I cannot find any reference therein that could be so construed.
Again on June 9, as reported in Hansard on page 3700, I find these statements in an address by the right hon. leader of the opposition:
And we have those who are responsible for providing the relief telling them that if they do not vote Liberal they will be hungry.
As a result of that statement the right hon. Prime Minister (Mr. Mackenzie King) asked the leader of the opposition this question:
Will the right hon. leader of the opposition give the committee the name of a single individual who stated to any one that unless he voted in a certain way he would go hungry?
Mr. Bennett: The hon. member for Regina
City is reported in the press to have said that the reason why the electors of Saskatchewan should return Liberal candidates in that province in yesterday's election was that they had obtained more money than they would have obtained if there had not been a Liberal government there and a Liberal government here.
Once again, Mr. Speaker, I deny absolutely that I made any suggestion that any money had been obtained by the people of Saskatchewan, either through the provincial or through the dominion government, other than that -which was necessary by reason of the disaster which had befallen that province.

Topic:   PRIVILEGE-MR. McNIVEN REFERENCES BY MR. BENNETT TO STATEMENTS REPORTED TO HAVE BEEN MADE IN SASKATCHEWAN ELECTION
Full View