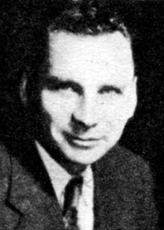 In fact, I notice that they are blushing; and they have good reason for blushing. Let me tell this house why. After the results of the election were known, there was in Edmonton one of the most enthusiastic demonstrations ever held in its political history. According to the Edmonton newspapers, communist supporters and other speakers addressed the crowds at the Kennedy committee rooms; Mr. Kennedy thanked Jan Lakeman, the Alberta communist chief, for his support and called him to the platform to address the crowd.
May I quote further from the Edmonton Journal.