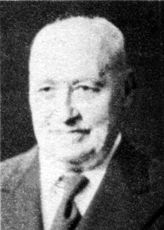 Hospital care scheme. The Prime Minister (Mr. St. Laurent) has clearly laid down the terms on which the government is willing to proceed with the plan, and we all know that it is going to cost the treasury of the federal government real money. By coincidence it is going to cost the treasury almost exactly the same amount in millions of dollars as the amount by which the hon. member for Assiniboia suggests that family allowances should be increased to bring them up to the level of the increase in the cost of living since 1947.
Maybe I am wrong, but I have the impression that if all the citizens of Canada could have their choice between an increase in the family allowance to bring it up to an amount that would compensate for the increase in the cost of living since 1947 or a plan whereby the national government in co-operation with the provinces will go ahead with a national health insurance scheme they would, in my opinion, vote by an overwhelming majority, probably by 99 per cent, to go ahead with the national health insurance scheme.
I had the great privilege this summer of travelling quite extensively in several of the countries which are most often held up in the house as being the ideal welfare state countries in all the world, namely the Scandinavian countries such as Denmark, Sweden, Norway and so on. I spent some time in each of those countries, and on some other occasion this session I hope to have the privilege of saying something about civil defence in that wonderful country, Sweden, where I had the privilege of examining their system.
However, tonight I want to talk for a minute or two about how the welfare state schemes in these countries compare with our own. These countries are often portrayed by the hon. gentlemen immediately opposite me as being the most advanced in all the world in this regard. Not one of these countries has a family allowance scheme that compares in any way with what we have right here in our own

Dominion of Canada. For instance, in Finland the family allowance payment is 1,200 markkas per year, very much less than Canada. In Norway the family allowance payment is 240 kroner per year, and the first child gets nothing. In Sweden the amount is 290 kronor per year. In that country it is allinclusive. You do get a grant even for the first child. In Denmark the amount is roughly the same as in Sweden.
But in all these countries, Mr. Speaker, quite a rigid means test is applied in the case of all their welfare measures, not only with respect to unemployment insurance but also old age pensions. To date they have nothing comparable with what we have here under our old age security system payable to everybody right across the board.