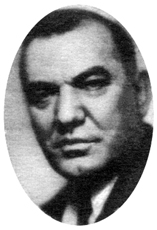 Everything which is common sense is always out of order with you, Mr. Chairman.

I should also like to quote extracts from the second and final committee report dated Friday, July 12, 1946:

The joint committee of the Senate and the House of Commons appointed to consider and report upon a suitable design for a distinctive national flag for Canada, begs leave to present the following as a second and final report: Your committee held fourteen public sessions. The submission of designs to the committee was publicly invited and up to and including this date, 2,695 designs were received and considered. In addition, communications in the form of written letters, resolutions and printed form cards and printed form letters to the number of 42,168 were received and whenever the sender's name and address were given, receipt was acknowledged-

In the discussion of all phases of the subject assigned to the committee an admirable spirit of tolerance and co-operation was reflected.

The committee adopted a flag. I presume that the choice of design was directed by the government of the time. I do not think the committee decided on the evidence. As I said before, both prime minister Mackenzie King and Mr. St. Laurent, the then minister of justice, had indicated what should be on the flag.

Perhaps it is a good thing that the government should not impose its choice of a flag on the people. Such a flag would not please everyone. A flag chosen by referendum by a large majority of Canadians would be more acceptable to the nation than one selected by the government. There would always be people who would bear a grudge against any party that imposed its choice of a flag upon the nation. Resentment would build up, and the design would not be wholly acceptable. If, however, the design were picked by the nation it would be readily acceptable.

It is almost scandalous that a nation of 18 million people does not have its own flag. Young nations like Ghana and others who are also members of the commonwealth adopt their own flags the same day they attain their independence. It is my sincere hope that long before the celebration of our centennial this nation will have adopted a flag of its own that will be a symbol to everyone of our independence, unity and fraternity.

Paragraph (b) of the

(b) the conduct of naval, military and air operations in or beyond Canada.

Will the minister tell me if the National Resources Mobilization Act, as amended by bill No- 80, will be the legal authority for the application of paragraph (b) ?

You have to apply this

For a copy of all memoranda, correspondence, telegrams and other documents, addressed by the government of the province of Quebec to the federal government, from August 25 to October 1, 1939, on the subject of Canada's participation in the war.

What sums were contributed by the federal government to the government of the province of Quebec, from August 26, 1936, to November 8, 1939, in the form of statutory grants, assistance to unemployed, contributions to old age pensions and to the blind, and in any other manner?