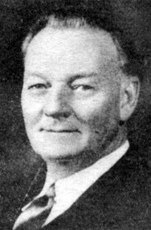 1. Has the government acquired property in the city of Ottawa to be used as an official residence for the Prime Minister of Canada?

2. If so (a) where is the property located; (b) what was the price paid for it; (c) when will it be made available to the Prime Minister of Canada?

3. If no such property has been acquired by the government, is an official residence for the Prime Minister being considered? If so, will it be located in the city of Ottawa?

should like to direct an inquiry to the Minister of Finance or the appropriate minister. On February 9 a number of questions asked by me were passed as orders for returns. I received an answer to the first two, but not to the others; I was informed that they would be answered elsewhere. I should like the minister to see that I am provided with correct answers to the questions that were not answered.

Those who are civil and obedient servants of the people are the most valuable persons in the country. They are the individuals who have made a special study of methods, and who know how to bring about any result desired by the people, if given a free hand.

I might add that all through history, whenever these institutions established by our forefathers have been undermined and have begun to decay, the countries of which they have formed a part have also decayed. And so would Canada and this great British commonwealth of nations decay.

It is our duty as individuals to attack all the abuses in these institutions we can recognize, no matter where they may be. If we can do that we will save this Christian civilization which we and our ancestors have endeavoured to establish. And so, it is all this abuse, and all this interference with genuine business by incompetent and artificial government employees, and all this abuse of institutions and of power-because these bureaucrats do not know how to use power; they know only how to abuse it-about which I am speaking. All of these abuses as well as this false, this perfidious, this inhuman, this despicable method of obtaining revenue which we call taxation; this unnatural and artificial diet of spam and spork instead of the genuine meats we can produce in great abundance; all this cheap and flashy jewelry you see for sale in stores, made of glittering glass, bright tin and so on; all this shoddy cloth that is sold for clothing-I am told that there is anywhere from ten to ninety per cent of old worn-out underwear shredded and woven into the clothing we buy today-the poorest type of cloth that has ever been turned out in the fMr. Ashby.]

past hundred years and that is being sold at three or four times its value; all this hypocritical, and I do not think I am wrong in so calling it, lying political oratory; all these beer parlours and government black market liquor stores; all these sensational magazines and movies depicting unnatural family life and living; all these things have been sown by the political parties in power and under the care of the political party cabinet, all these artificial, counterfeit and contemptuous things have grown up, and developed, have branched out, have blossomed forth and gone to seed like sow-thistles and stinkweed in a field of what would otherwise be the finest wheat, crowding out the good, distorting and polluting the natural God-given thoughts of our young people with false ideas and unnatural beliefs, confusing the people generally, and resulting in all the misery we see about us, in the wholesale arguments we hear, in the shoutings of men and screamings of abused women, in raucous laughter, in drunkenness, in divorces, in murder and suicides, in thiev-ings and robbery, in violence and filthy slums, in human garbage and ending up, periodically, in wars and wholesale slaughterings of our finest youths and the destruction of what we call our Christian civilization we and our ancestors have endeavoured to build up in past centuries. All this, I say, is the result of maladministration, of evil administration; and the political party which has held the reins of government each time, until it has brought about a depression, was the Liberal party. What a record of crime that is to be placed upon our Canadian records for ever. I should like to have the job of erecting a statue to commemorate the prime ministers who have held office during the past 25 or 30 years, for that is when most of the damage was done. I would employ the greatest sculptor living in the world today and I would have the image carved in the finest clay. I would place it out here on the lawn in the most prominent place so that the first shower that would come along would make of it the true image it really was. Have hon. members ever seen mud that has been rained upon?

I said that I would give hon. members of this house a few details of the methods by which we can abolish taxation, and I shall do that now if I have the time. The method which I am sure would bring about the desired result and of which perhaps I am more in favour than any other; the method which would revive an old custom of the British people and one which I am sure would be approved of by millions of people throughout the country, particularly in Ontario, which province would benefit most of all from an influx of tourists; the method which would immediately solve our problem of a

shortage of United States dollars would be to place the Prime Minister and the members of the cabinet in stocks out here on the lawn between the hours of ten-thirty a.m. and two-thirty p.m. until some method other than taxation was discovered by them or their deputies.

I will guarantee that within thirty days all taxation would be abolished.

Taxation is simply one of many methods of obtaining revenue as there are many methods of transportation. The taxing of money from the people is not the only method, any more than driving in a horse-drawn buggy is the only method of transportation. It would not matter what method I or anyone else might suggest, there would be those who would object. If I said that the automobile provided the best means of transportation today I suppose a dozen men would jump up and produce statistics showing the numbers that had been killed or the accidents that had taken place in an effort to refute this method.

Taxation is not the only method and before I am through I shall give some alternate methods. Another method we could use to abolish taxation would be for all religious leaders who believe in the sanctity of the family and the home to denounce all those engaged in taxing the people. Taxing is not a native British method nor is it a Christian method; it is an alien method, a communist method. According to the communist manifesto it is an essential method used to force people to become absolutely dependent upon those who through trickery and deceit have gained control over them.

Taxation is a false and erroneous belief among many people. Another false and erroneous belief is that held by those who collect the taxes, by those who are employed directly or indirectly by the department of taxation, that if people are paid by the officials of the Department of National Revenue to commit an offence or injustice against their fellow Christians, the responsibility for the crime rests upon the institution, upon the department, upon the government or upon the bureau and not upon the individual who commits the offence. This is false for each individual is responsible. I do not blame the hired criminal. I do not blame those who break bad laws so much as I blame those who make bad laws.

There are other methods. I have had people tell me that you cannot get away from taxation, that you must pay taxes, but my reply is: "If you believe that taxation is necessary, you pay taxes, but do not impose your will upon me and force me to pay them". In my speech on February 24 I said that the key to the whole situation was personal 29087-864

The Address-Mr. Ashby responsibility. Another method to abolish taxation would be to have recorded on every ballot paper on which people vote the name of the individual with his or her address on the ballot paper, and explain that those who vote for the political party which imposes taxes shall pay the taxes, and those who did not vote for that political party shall be exempt from paying taxes.

I am not attacking any civil and obedient servant. Perhaps I might illustrate what I mean in this way. My ancestors never kept any record of where they came from originally, nor of where they originally landed on the British isles. So far as I can gather it was before Magna Carta. It may have been, however, that my ancestors were from Norway. It is assumed they came from Scandinavian countries. It may be that one of my ancestors was driven from Norway by an irate fisherwoman who probably heaved a garbage can lid at him as a parting gesture; for my family crest appears to bear on it something which resembles the lid of a garbage can, on which is emblazoned the open-mouthed skull of a dead codfish, and crossed ham-bones-which would seem to indicate that the family was very fond of seafood and juicy sugar-cured ham.

There is this fact, however, which I should bring out, one which is of the utmost importance today. Ever since that time the Ashby family has handed down this thought from generation to generation-one which too many of us have forgotten. It is the thought that under no circumstances should we ever destroy an institution established by our forefathers. Remove the abuses-yes; attack all these abuses which will inevitably be introduced by those of evil intent; but never under any circumstances whatever must we allow these institutions to be destroyed.

When I refer to a civil servant I am reminded of our royal family. And when I think of our royal family, the greatest servants any people on this earth ever had, I wonder how many of us could recite the identical words uttered either by His Gracious Majesty the King or by Her Royal Highness Princess Elizabeth. Is there any member in the house who could stand here, or could stand anywhere else, and state

The Address-Mr. Ashby definitely the words either of them has uttered? I doubt if any of us could. Yet many of us could recite the words uttered over the radio about soap, or some other product. I remember Her Royal Highness Princess Elizabeth speaking over the radio, saying something like this, "I pledge my life to the service of our people."

We hear people condemning our institutions. We hear people saying, "What is the good of this old Senate? Look at the old crocks who are in there." Yet, the Senate and the House of Lords are institutions established for a purpose. That purpose may have been forgotten by this time. But they were set up for us by our forefathers. We note that they are under attack today; they are being undermined by abuses introduced into these institutions by political parties.

It is the abuse of the civil service I am attacking today.