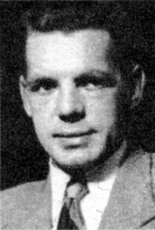 Most Recent Speeches (Page 1 of 3)

the absence of the Minister of Finance (Mr. Abbott) I would like to ask a question of the Acting Minister of Finance (Mr. Garson). Is he aware of the fact that job printing work in connection with the recent Canada savings bond issue was done in the United States? Why was this, and can the minister assure this house that Canadian printers will be given an opportunity to do this work in the future?

Mr. Chairman, I should like to remind the minister of a condition that

exists in my riding and perhaps to suggest a solution that might be looked into. At the present time there are in my riding approxi-ma ely 742 unemployed persons, and orders for jobs exist for only some 80 people. In addition, on part time and perhaps working two or three days a week are well over 1,200 people. In former years-or at least as far back as I can remember-Waterloo South, with its great textile industries, its woodworking firms and its large metal industries, was always one of Ontario's most prosperous communities. The fact that we have almost

2,000 people not working steadily is an indication that somewhere there i.s something wrong.

This condition has existed for almost a year. I defy any member of the government or any person in this committee to tell me or the people out of work in my community that the condition is only seasonal. One of the factors that contributes largely to unemployment in the furniture factories in my riding is the effect of the deferred depreciation regulations. Last year the Minister of Finance disallowed for four years depreciation on new plant and equipment. This disallowance definitely slowed the sales of factory, office and store fixtures and furniture. I have heard of many large retail firms which are refusing to remodel their stores with new articles of equipment, thereby causing unemployment in our furniture factories.

In larger towns and cities where people who are out of work are easily absorbed by other industries, this is not a serious condition. But in the smaller cities and villages where there is a large amount of unemployment, these people cannot be absorbed by other industries. I would urge the Minister of Labour to use his influence with the Minister of Finance with a view to getting him to correct this situation as soon as possible.

Topic:   AMENDMENT TO INCREASE RATES OF BENEFIT, TO REDUCE THE NUMBER OF WAITING DAYS BEFORE RECEIPT OF BENEFIT, ETC.
Full View Permalink

Of course not, Mr. Speaker.

-I am rather surprised at the motion made by the hon. member for Winnipeg North Centre (Mr, Knowles).

As I say, Mr. Speaker, I was rather surprised at the motion moved by the hon. member for Winnipeg North Centre. Along with the rest of the members of this house I recognize the inconvenience that the [DOT]continuance of this debate is causing for hon. members. But I should also like to remind the hon. member for Winnipeg North Centre that at the present time there are, in Korea and in Europe, thousands of our Canadian soldiers who are just as anxious as we are here to be home with their families for Christmas. It may be said that they joined the Canadian army of their own free will, that what they are doing is their duty and they are doing their duty. I do not think any of us are forced to be here. I think we are .all here in Ottawa of our own free will.