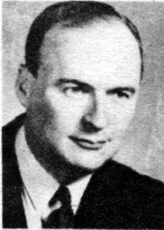 Q.-I see by your balance sheet dated December 31, 1953 that, apart from government bonds and fixed capital, your assets are only about $90 million?

Q.-Supposing that in order to reach a certain objective you had to buy for more than $90 million worth of government bonds, how would you go about paying the amount in excess of $90 million which you would not have and which you had to pay immediately?

A.-In answering this question I might invite the criticism of Mr. Low on the one side and Mr. Macdonnell on the other, for we would pay the additional government bonds by crediting the amount in our books, namely to the deposit account of chartered banks. Whether or not we purchase the bonds from the banks is immaterial, this procedure can be repeated indefinitely.

Q.-Indefinitely. I thought so, but in an emergency would you not simply make a new issue of money? I suppose you would only have to make a book entry and then pay the bonds, thereby increasing the amount of money in circulation?

Q.-That is creating money, is it not?

Is that plain enough, Mr. Chairman? Creating money with one stroke of the pen. You see how easy it is for chartered banks to obtain money. Should they lack any, the Bank of Canada will even be so generous as to make deposits for them. Then, the chartered banks will only have to multiply the

said deposit, which did not cost them a penny, to lend the whole amount to the people. It is as simple as that.

But, it is precisely that operation that the financiers have always withheld from the people. And Mr. Cannon continues:

Q.-During your testimony, you said that there is no limit to the amount of money which can be issued at any time?

Where is the control of the Bank of Canada, Mr. Chairman? Do you not think that it would be a good thing to set a limit? Here it is the chairman of the committee, mind you -it is the chairman of the committee who comes to the rescue of the governor of the Bank of Canada, short of arguments. Besides, the same thing occurs all through those inquiries, when the big shots are in danger, when the representatives of the people attempt to know more about the limits set by big finance. Listen to the last answer of the chairman of that time.

We already have fully discussed that matter.

That is the real shield of the present financial myth. The truth must not be revealed. Therefore, what is the part played by that chairman? I ask you. Is he not there to guarantee the freedom to both parties or to provide only the security of the big financiers? It is for you to decide. As for me, I have only read the evidence. It is strange anyway. And the saddest part of it is that these actions from the chairman occur on many occasions. For example, on page 128, when Mr. Tucker was questioning Mr. Towers:

Mr. Towers, you still hesitate at this time to tell us whether it was wise or not on the part of the federal government in the early thirties to deliberately let the deficits accumulate to make up for the purchasing power which was no more in the hands of the people?

Mr. Speaker, with your permission and with the indulgence of the house may I make an uncontroversial announcement. It is that the annual meeting of the NATO parliamentary association which was called for ten o'clock this morning has been adjourned until 3.30 this afternoon, in room 368 of the Senate.

I have listened with interest to this debate, and particularly the questions that were asked of the minister by the hon. member for Winnipeg North Centre, the hon. member for Essex East and the hon. member for Montmagny-L'Islet. They asked him to tell the house and the people of the country whether or not he was going to continue the equalization payments that were instituted by a Liberal government, or whether he was going to introduce some other measure. For the record, Mr. Chairman, I wish to suggest the answer that the minister should give under the circumstances. The answer he should give, to be absolutely truthful, would be to say that the present government has found nothing better than the equalization payments that were instituted by the Liberal government. The reason for this is easy to understand. The best brains of the Liberal cabinet tried to find a solution to these dominion-provincial tax-sharing difficulties for a great number of years, and I do not think it is any exaggeration to say that the best brains of the Liberal cabinet were at least equal to the brains we have in the cabinet now. In so far as advisers are concerned, they have the same advisers as the Liberal cabinet had.

If the Minister of Finance were fair and just and truthful, he would say they have found nothing better than the equalization payments. That they intend to go along with the equalization payments. He would admit also that the Prime Minister, yes all the Conservatives who waged the last campaign, were deceiving the people of Canada when they told them that they had a solution for the dominion-provincial fiscal problem that was better than the solution we had. They had no such solution then, and they have no such solution now, and I defy them to say what it is if they have one.

Would the minister permit a question, and this is not claptrap? Does the insistence of the minister on the fact that we are importing too many manufactured goods mean that the Conservative party is now thinking seriously of returning to its old policy of high tariffs?

May I address a question to the Minister of Public Works. On January 7 last I drew the attention of the minister to damage to the wharf at Grindstone and the urgency of making repairs. I suggested that steel for the repairs should be ordered immediately. My question is, have instructions been given in his department for the steel to be ordered?