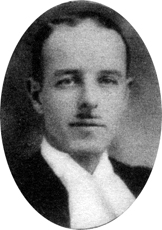 It is evidently a formal picture, because all the officers are wearing gloves and swords. The officer of whom I speak could not, by any standard, be described as either a good physical specimen or a good figure of an officer on parade. His head is resting on a splendidly developed double chin. He holds the rank of lieutenant-colonel, and large rolls of lieutenant-colonel are protruding over his Sam Browne belt.

That is not the type of officer that marched for the other dominions at his majesty's coronation. Words fail to describe the effect as I cast my eyes down his figure. His voluptuous calves are protruding from ill-fittings leggings, and his breeches-what shall I say of his breeches 1 They are tight where they should be loose and loose where they should be tight. They bring irresistibly to my mind that ditty immortalized by the troops

in France about "those funny little pants that Maggie wore; they were baggy at the knees"-I won't continue, Mr. Speaker.

Let me make it clear, without any levity whatever, that that is not the type of officer who should have been selected to represent the Canadian militia at his majesty's coronation. And let me add that my criticisms have been echoed in every mess room, drill hall and canteen from Halifax to Vancouver.

Then, when we get to London, we find, in the picture I now hold in my hand, the guard moving to Buckingham palace, surely an important occasion. There they are moving along in fours and apparently the command "Eyes left!" has just been given; a compliment is being paid to somebody on the left of the parade. But one of the non-commissioned officers-a high-ranking one, you may be sure of that, because practically everybody in that contingent was high-ranking-is not thinking at all of the reason for the command; he is thinking of the girl he left behind him, or the big stoup of beer he will have at the barracks when he gets back. He is gazing straight ahead; he has missed out on his drill. Let me add that he is not one of the markers, and so his head and eyes should have been turned to the left. That is the sort of thing that happens when the canker of patronage eats into any department.

Taking up this souvenir book, which I imagine has had circulation 'all over the empire, we find a photograph of the Canadian contingent moving through Piccadilly circus, and at the head we see the band of the Royal Canadian regiment, moving as one man; properly covered off; all in step, just as smart as paint; and we cast our eyes to the left and find the Royal Canadian Mounted Police, a credit to their corps, their commissioner, and their dominion. Then behind that, there is a serpentine effect of troops wobbling about, not covered off, a bulge in the centre of the column-bad drill, almost no drill at all.

This was not an occasion on which to sound the party tocsin and raise the party standard and summon old Colonel Dropsy and Major Spavin from the Liberal committee rooms and send them overseas on a joy ride. The minister was not administering Liberal campaign funds; he was spending public money. He overlooked that, but the country has not overlooked it. Why did not the minister in making his selections pick fine upstanding fellows like himself who would make the girls catch their breath and say: "Oh boy!" when the troops marched by? I protest on behalf of the Canadian militia

and on behalf of the Canadian taxpayers that patronage was allowed to ruin this golden opportunity to advertise the Canadian militia in the heart of the empire.

Mr. Speaker., in seconding this motion I should like to associate myself to the fullest possible extent with the remarks made by the hon. member for Yale (Mr. Stirling) in connection with the by-election in Victoria, and I should like to draw the attention of the house to another occasion upon which the minister, or the department, or the government, or all of them, fell into the same deplorable state as they did in connection with the Victoria byelection, in that expenditures of public money in connection with a very important function of the government were made for partisan purposes. I refer to the method by which the Canadian contingent that was sent overseas to represent us at the coronation was selected.

As I have pointed out in this chamber before, Mr. Speaker, the coronation presented a golden opportunity for the Dominion of Canada to advertise its greatest product, its man power, at the greatest festival of empire that the world has ever seen. It was an occasion upon which the minister and the department and the government should have spared no pains to select from what I claim is the smartest body of men in uniform in the world to-day, the Canadian militia, a contingent that should be second to none. They should have been perfect in physique, perfect in drill, perfect in every respect in so far as what meets the eye may be concerned-because this was a parade, Mr Speaker. Our contingent, as did the other contingents, marched through the streets of London before a cloud of witnesses from all parts of the empire, and my complaint, and I am prepared to prove the facts on which it is based, is that in selecting the personnel of the Canadian contingent other considerations than those of merit entered into the mind of the minister. [DOT]

First of all I should like to refer to the King's Regulations and Orders for the Canadian Militia, which, by virtue of the Militia Act, have the force of statute law. Paragraph 429 reads as follows:

An officer is forbidden to write private letters to officials at National Defence headquarters, on official personal matters.

fluenee are forbidden, and, if resorted to, will be regarded as an admission on the part of the applicant that the case is not good on its merits, and it will be dealt with accordingly.

When an interview is asked for, or a letter written on behalf of an officer by any person other than himself, such application will be deemed to have been made at his suggestion, unless he can show to the satisfaction of the authorities that he has no knowledge, directly or indirectly, of such application.

Now I state as a fact, Mr. Speaker, that that paragraph was not adhered to in the selection of those who made up our Canadian contingent, and I submit, and I am prepared to prove it if given the opportunity, that political pressure was brought, and brought successfully, upon the department, with the result that the type of contingent that should have represented Canada did not go to London.

Just as one instance of what took place, let me say that I know of one entire corps which was. represented by only one officer. That is manifestly unfair on any basis of representation. The one officer who was chosen announced some four months before the selections of the contingent were made, shortly after it became known that a contingent was to go to the old country, that he had great pull with the government, and that he was going to London. And go he did. I can think of nothing that will operate more effectively to destroy the spirit which has always permeated the Canadian militia, the spirit which built up for Canadian troops a name that will live as long as history is written; and I challenge the minister to show that political influence was not brought to bear constantly in the selection of the Canadian contingent. As a result of that, because the smartest, the best drilled, the most perfect physical specimens that could be selected were not selected, many very unfortunate incidents followed.

There is, Mr. Speaker, a quaint old military custom, familiar to you, I have no doubt, familiar to all members of the house, certainly familiar to the minister, that when soldiers are on parade they march in step. I hold in my hand a photograph of the contingent taken on this side of the water as they approached the boat at Montreal. Let me make it quite clear at this point that I am aiming no criticism whatever at the Royal Canadian Mounted Police, none whatever at the representatives of the Canadian navy, and none at the band of the Royal Canadian regiment. My remarks are confined strictly to the militia contingent, composd, I believe, of 256 persons, thirty-two of whom were colonels or lieutenant-colonels and five of whom were privates. If the minister will take the trouble to scrutinize this photograph-and remember,

this was a public occasion-he will find, on looking at these persons representing the Canadian militia, that one soldier in the front rank is not in step with his leader, who is about ten feet distant.

That is of course bad drill, but it is bad business too. Going a little further, we come to the selection from a very large and important garrison centre, in which the local military authorities recommended an extremely smart officer who would have done great credit to them' as their representative. But he was overlooked, for very obvious reasons, and in his place was sent one who could only be described as the ward heeler supreme of that part of the country. He has been the bearer of the Liberal banner in every election since time immemorial, and is now enjoying a well-earned rest in a cushy patronage job which he derived from the present Liberal government of the province. I have here his picture taken on shipboard- and let me say, I bear no malice towards him in making these remarks. I make these remarks because I am particularly keen as a former militia man that the Canadian militia should be properly represented on important occasions of this sort, and I feel it a duty to the militia of the country to bring to light the manner in which patronage overrode all other considerations in the selection of this contingent. I leave it to the minister to look at this photograph I have here, showing some of the officers of the contingent that crossed the ocean-I leave it to him to decide whether this officer of whom I speak, who was chosen over the head of the local authorities, is a smart soldierly figure.

On a question of privilege, I should like it to be made clear that we are speaking of London, England, not London, Ontario.

What are the particulars of the grant of $4,000 for relief of distressed seamen? What form does that take?

Before the orders of the day are proceeded with I should like to ask a question of the Minister of Transport (Mr. Howe). On Sunday last, commencing at 6.30 p.m., radio station CBL carried a broadcast by a Mr. Ferguson who is an editor or other employee of the Winnipeg Free Press. In the course of his remarks he suggested that Britain prefers a weak Spain in order that her line of communication to the orient may not be threatened and, further, that the failure of Britain to support General Franco in Spain is attributable largely to Britain's desire to protect her investments in Spain. I should like to ask the minister whether this broadcast was made after review by and with the approval of the Canadian Broadcasting Corporation. If so, I should like to know the name of the reviewing officer.